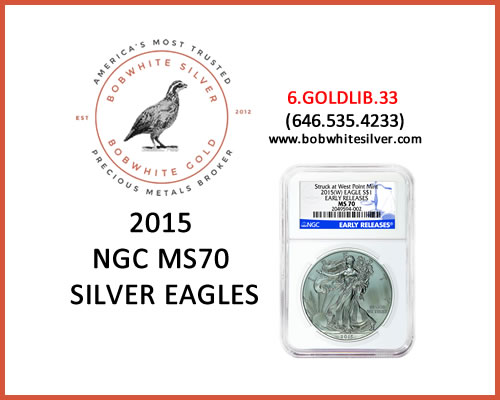 First released by the United States Mint on November 24, 1986, the universally recognized Silver Eagle has a nominal face value of one dollar and is guaranteed to contain one troy ounce of 99.9% pure silver.

2015 marks the 29th issue of this iconic coin. Simply put, the American Silver Eagle, with its Walking Liberty obverse and Heraldic Eagle reverse, is the most popular Silver coin in the world. The 2015 NGC MS70 Silver Eagles offered here are certified by the Numismatic Guaranty Corporation (NGC) as perfect MS70’s, the highest grade possible. In addition, these coins also carry the Early Release designation, signifying that the coins were issued in the first 30 days of the US Mint’s release.

Each of these beautiful 2015 NGC MS70 Silver Eagles is “slabbed” in a sealed, colorless plastic holder, which is designed to be stackable. Anti-counterfeiting measures include a holographic emblem on the back, a unique serial number assigned to that particular coin, and a barcode. 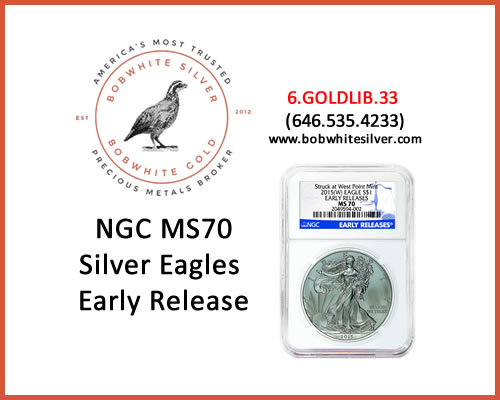 Each coin has been verified by NGC as being from the very first coins distributed by the US Mint. 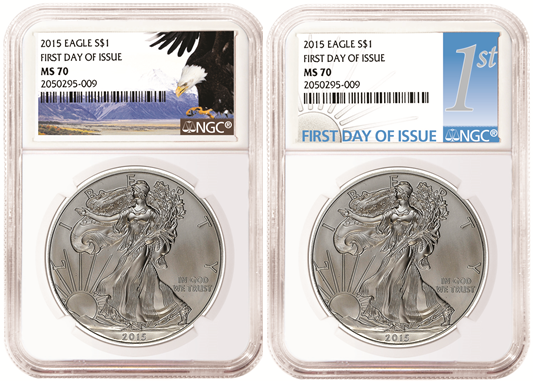 Hey – I’ll sell you some if you insist, but in my opinion, you’re wasting your money!
Is another dealer going to be this transparent? Probably not. Just another reason I’m known as America’s most trusted precious metals broker.

The Silver Eagle’s obverse was taken from the “Walking Liberty” design by Adolph A. Weinman, originally used on the U.S Walking Liberty Half Dollar (1916 to 1947). As this design was one of the most beloved United States coins of modern times, it was revived for the Silver Eagle. The obverse is inscribed with the year of issue, the word LIBERTY, and the phrase IN GOD WE TRUST.
The reverse was designed by legendary engraver John Mercanti, the twelfth Chief Engraver of the US Mint and the designer of over 100 US coin and medal designs. The Eagles features Mercanti’s portrayal of a heraldic eagle behind a shield; an olive branch in its right talon and arrows in its left talon, echoing the Great Seal of the United States. Above the eagle are thirteen five-pointed stars representing the original Thirteen Colonies. The reverse is inscribed with the phrases UNITED STATES OF AMERICA, 1 OZ. FINE SILVER, ONE DOLLAR, and E PLURIBUS UNUM.

At bobwhite silver bobwhite gold (BSBG), I bring over $1.6 billion in business experience to the trading desk. If you require a broker who, in addition to offering great prices and quick delivery on items like these 2015 NGC MS70 Silver Eagles Early Releases, provides you with that personal touch, offering patience, transparency and integrity, bobwhite silver is definitely your best choice.

If you have any questions about the 2015 NGC MS70 Silver Eagles Early Releases, or you’re ready to make a purchase, please call me at 6.GOLDLIB.33 (646.535.4233) seven days a week! No ever-changing bunch of guys in cubicles, no, “please listen as our menu options have recently changed”, no “dial 9 for a company directory”, just me, Joel (bobwhite is a bird).

Disclaimer – the name of this website is solely a description of the product we sell. This site is owned and operated by BOBWHITE SILVER BOBWHITE GOLD INC. We are not affiliated with NGC, nor do we mean to imply any affiliation with NGC, nor do we claim to represent them in any fashion whatsoever. We don’t! We simply purchase NGC certified coins on the wholesale market and resell them at highly competitive prices with the best customer service anywhere on the web.